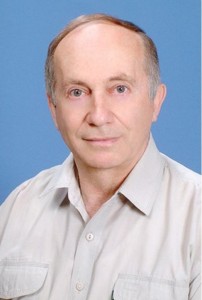 In 1970 graduated Voroshilovgrad Machine Building Institute by specialty “Semiconductor and electro vacuum machinery” and was qualified as mechanical engineer.

He participated in student building movement in Siberia.

In 1991 received a Ph.D. in Glushkov Cybernetics Institute to the Ukraine Academy of Sciences.

Since 2011, professor of Machine engineering and applied mechanics department.

Author of over 200 scientific and methodical works.

During the time at the University: 2 textbooks with the stamp of the Ukrainian Ministry of Education and Science (in collaboration), 14 schoolbooks with the stamp of the Ministry, 11 monographs (the monograph “3D Modeling of Machine Tools for Designers” was published in English by the Bulgarian Academy of Sciences with DOI digital object identifier: https://doi.org/10.7546/3d_momtfd.2018 ), 221 article (8 of which are in the SCOPUS rating), 34 patents, 1 software in the State Fund of Algorithms and Programs No. 50890001267, has the Hirsh index 3.